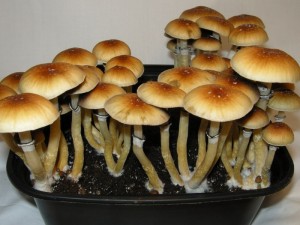 “Magic mushrooms” is a term used to describe any fungus that is capable of producing hallucinogenic effects. One of the most popular and commonly available of the “magic mushrooms” is Psilocybe Cubensis. There are several varieties within this species living within ecosystems found all over the world.

The main psychoactive component in “magic mushrooms” is the pro drug psilocybin. A pro-drug is a compound that is biologically inactive on its own, but it breaks down into an active form. In this case, the active form is psilocin. Psilocin is also present natively in the mushroom, but in very small amounts.

When “magic mushrooms” are seized as evidence, they are sent to a crime lab for a forensic drug analysis. This analysis is not identifying the botanical substance Psilocybe Cubensis, but rather the characteristic chemical compounds, psilocybin and/or psilocin. The drug analysis will not be able to identify the species of mushroom present, but the analysis should be able to identify psilocybin and psilocin, which are both Schedule I controlled substances.

However, this analysis is not as reliable as a crime lab report might indicate. Lab analysts seldom receive this type of evidence, and the typical lab process is not designed for these substances. These substances are present in very small amounts, which means testing is occurring at the edges of its capabilities. They degrade under normal environmental conditions, but particularly heat and light. This means they degrade under police storage and laboratory conditions also.

If you have been charged with selling and possessing mushrooms in Pennsylvania or Federal Court one of the most crucial parts of defending these cases is attacking the mushroom test results. Few lawyers do this but is one of the first pieces of evidence we review. The testing of mushrooms is very complex and in my firm we get the test data which can be hundreds of pages of paper. It isn’t the one page piece of paper that the lab gives the police in mushroom cases. If charged with mushroom possession or sales charges in Pennsylvania call our firm at (888) 994-7616.